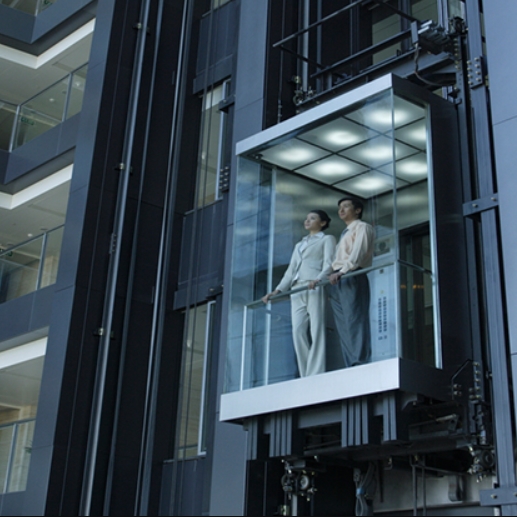 Tianhongyi Sightseeing Elevator is an artistic activity that allows passengers to climb high and look into the distance and overlook the beautiful outdoor scenery during operation. It also gives the building a living personality, which opens up a new way for the modeling of modern buildings.

Tianhongyi Sightseeing Elevator is an artistic activity that allows passengers to climb high and look into the distance and overlook the beautiful outdoor scenery during operation. It also gives the building a living personality, which opens up a new way for the modeling of modern buildings. There are round and square sightseeing elevators. The side wall of the elevator adopts double-layer laminated tempered glass, which is comfortable, safe, luxurious and practical, and is an ideal viewing spot.

1. Advanced control technology, safe and stable and comfortable riding feeling, and multiple angles of the outside scenery of the ladder, bring users a piece of enjoyment and a piece of novelty;

2. A universal design that is convenient for passengers. The glass steel structure of the sightseeing elevator not only perfectly shows the compact space, but also the overall beauty. It can also be designed according to different civil works, which is convenient and quick, generally round, semi-circular, and square;

4. The humanized handrail is integrated with the building and the surrounding environment, not only becoming a part of the building, but also adding a beautiful moving scenery;

The sightseeing elevator has a car that runs between at least two rows of vertical rigid guide rails. The size and structure of the car are convenient for passengers to enter and exit or load and unload goods. It is customary to regard elevators as the general term for vertical transportation vehicles in buildings regardless of their driving methods. According to the rated speed, it can be divided into low-speed elevators (below 1 m/s), fast elevators (1 to 2 m/s) and high-speed elevators (above 2 m/s). Hydraulic elevators began to be used in the middle of the 19th century, and they are still used in low-rise buildings.

Modern elevators are mainly composed of traction machine, door machine, guide rail, counterweight device, safety device (such as speed limiter, safety gear and buffer, etc.), wire rope, return sheave, electrical system, car and hall door, etc. These parts are respectively installed in the shaft and engine room of the building. Generally, steel wire rope friction transmission is adopted. The wire rope goes around the traction sheave, and the two ends are respectively connected to the car and the counterweight. The motor drives the traction sheave to make the car go up and down. Elevators are required to be safe and reliable, high conveying efficiency, accurate leveling, and comfortable riding. The basic parameters of the elevator mainly include the rated load, the number of passengers, the rated speed, the size of the car and the type of the hoistway.

The suspension compensation system is composed of allthe structural parts of the car and counterweight, compensation rope, tensioner and so on. The car and the counterweight are the main components of the elevator running vertically, and the car is a container for carrying passengers and goods.

The guiding system includes components such as guide rails and guide shoes to guide the vertical lifting movement of the car and counterweight.

The electrical system is the elevator control system, including the control box, outbound call box, buttons, contactors, relays, and controllers. Send your message to us:

Send your message to us: